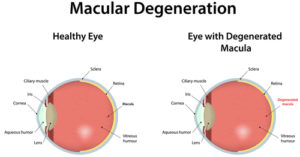 For those who have never had to deal with vision problems, it can be easy to take one’s vision for granted. As we age, however, one’s vision will change. This could mean eventually needing glasses, becoming extra sensitive to light, and even becoming more susceptible to eye conditions such as glaucoma, diabetic eye disease, or macular degeneration, which we will be discussing today.

In the year 2020, global projected cases of any age-related macular degeneration are 196 million, rising to 288 million in 2040 which includes approximately 39 million just for Latin America and the Caribbean according to The Lancet, Global Health. Per the National Eye Institute, it remains the leading cause of vision loss in people over the age of 50. Macular degeneration involves the breakdown of the retina’s central area, also known as the macula. The macula is tasked with maintaining sharp vision.

Individuals dealing macular degeneration don’t necessarily go entirely blind, but they do end up with blind spots that can significantly affect their vision and make day to day tasks more difficult. These people often need to rely on using their peripheral vision, which requires re-learning simple tasks such as walking through a doorway. In advanced cases, individuals may even lose their ability to drive, read, or even recognize faces.

Macular degeneration can be broken down into a pair of types: dry and wet. With the former, the retina may begin to atrophy due to an accumulation of lipid and protein referred to as “drusen” while the latter involves abnormal blood vessels that begin to grow below the retina.

While there is no definitive cure for macular degeneration, science has evolved enough to the point where it can be treated successfully during its early stages through the use of “eye vitamins” that include a fusion of vitamin E, vitamin C, and more. The disease can also be potentially prevented by refraining from smoking and maintaining a healthy lifestyle.